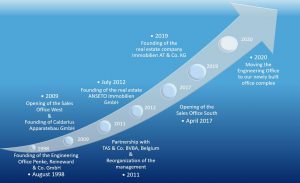 Internationalization
In August of the same year, the growth of Penke, Reineward & Co. GmbH continued with the founding of CALDARIUS Apparatebau GmbH, based in Haag am Hausruck in Austria, with the managing director and main shareholder Josef Hofmanninger.
At this factory, all heat exchangers, equipment and plants are designed, manufactured, approved and shipped. Material procurement, quality control and the approvals of compliance with standards take place in our modern welding company.

2011
Further internationalization
In July 2011 a close partnership with TAS & Co. BVBA established. The headquarters are based in Moerbroek, Belgium, witch guaranties, that the customers of the Benelux countries as well as France are well looked after by the new distribution partner and equipped with the most modern, technologically high-quality products.
August 2011 there will be a reorganization of the management. Mr. Herbert Penke leaves the company and Mr. André Kost forms with Mr. Torsten Reineward the new head of the engineering office Penke, Reineward & Co. GmbH.

2012
Expansion phase
In June 2012, the expansion phase is followed by the founding of ANSETO Real Estate GmbH [LCC].
The high market demand led in August 2012 to a relocation of the welding specialist company and an expansion of the production capacities. CALDARIUS Apparatebau GmbH [LCC] is renting 3000 m² [32.29 square feet] facility space from ANSETO Real Estate GmbH [LCC]. Here, separated into steel and stainless-steel production, the industrially high-quality products for energy-technical processes are produced.

2017
Expansion phase
Since April 2017, the Penke, Reineward & Co. GmbH [LCC] is also represented in southern Germany, in order to be able to advise our customers professionally on site. With the sales office South in Stuttgart Mr. Joerg Warnke works for us.

Today
Today, as a team of 45 employees at 5 locations in 3 companies, we do our very best to generate our common goal, total customer satisfaction.
Quality is when the customer comes back and not the product.